Here’s an animal that every Australian knows. The Blue Tongue Lizard is common in bushland and suburban backyards of Eastern Australia, but even the familiar has the capacity to surprise as I found out with this one!

The family was visiting friends in Gerringong 1 1/2 hrs south of Sydney. The kids came running in from the back yard saying they they had found a snake. We went out to take a look and found what was clearly a Blue Tongue Lizard half obscured under the back step. It’s legs were tucked under it’s body so it’s understandable that the kids though it was a snake. There was a small crowd of us watching it when it started to slowly lumber out of it’s hiding spot. The lizard seemed quite fat even for a Blue Tongue which I commented on, then all of a sudden a fully formed baby lizard popped out from the underside! It was a mum giving birth!

I’d assumed that Blue Tongues laid eggs like almost every other reptile, but a quick search confirmed that they, along with Red Bellied Black Snakes do indeed give birth to live young.

With enough food Blue Tongues are able to breed every year. They have litters of around 10 young at a time, but have been known have up to 25. Once born the young are independent and will disperse within a few days.

There are a number of species of Blue Tongue, they are found in Australia, New Guinea and Indonesia. I believe this one was a Eastern Blue-tongued Lizard. Eastern Blue-tongued Lizards are found within a few hundred Kms of the coast all around North, South and Eastern Australia. They are a silvery colour with dark banding across their body and tail, they can grow up to 60cm. If handled roughly by the tail Blue Tongues may drop their tail. The tail stump rapidly heals and a shorter regenerated tail grows back after a while. It looks like this has happened to the mum in the picture. 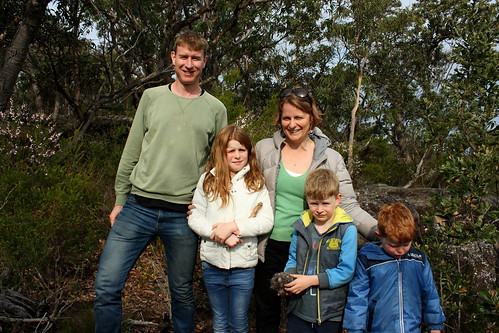 I wrote an earlier post on a spot at the tidal limit of middle harbour creek called Bungaroo where Governor Phillip and an exploration party camped on April 16th 1788.

It appears John ( who inspired my original post ) is still hard at work trying to uncover old records and get some official recognition for Bungaroo. As part of his research John said he’s now considering that the Bungaroo site of Governor Phillip’s April 16th camp may have been at the tidal limit of Rocky Creek rather than Middle Harbour Creek.

It sounded plausible, and a good excuse to head up Rocky Creek again for a closer look!

To get there I headed north on the trail that follows the west bank of Middle Harbour River.  Upon hitting Rocky Creek the trail heads west to where the creek can be crossed on foot near the tidal limit. When I got there the tide was low, the fresh water was cascading into the salt just below the crossing. At this point I left the trail and kept heading up Rocky Creek. About 100m further upstream the creek deepened to the point where I could not see the bottom, then a little way past this was a lip in the rock ( about 50cm high ) where the fresh water cascaded down. I’ll have to go back to confirm but I reckon this could be the point where fresh water meets salt when the tide is high. With the cascading fresh water meeting the salt at a deep pool this looks like a plausible alternate location of Governor Phillip’s Bungaroo camp.

I found some documents on the Manly Council site relating to Governor Phillips expedition and his April 16th camp.

They report that low tide on April 16th 1788 was at 11:16am, which would make high tide at around 5pm. The same documents recount Surgeon White’s ( one of the expedition members ) notes as saying they reached the tidal limit where fresh meets salt at 4pm, close to high tide.

“About four o’clock in the afternoon we came to a steep valley, where the flowing of the tide ceased, and a fresh-water stream commenced. Here, in the most desert, wild and solitary seclusion that the imagination can form any idea of, we took up our abode for the night; dressed our provisions, washed our shirts and stocking, and turned our inconvenient situation to the best advantage in our power.”

So it looks like they did arrive at the spot near to high tide, I will have to return at high tide to observe where fresh water meets salt. Of course not all high tides are equal, and we’re looking back to a time where mean sea levels were around 20cm lower than they are now.

I found out about Muogamarra nature reserve from a friend a few years ago and have been meaning to visit for a while. Muogamarra is located near Cowan just north of Sydney. Due to the sensitive nature of the local environment and cultural sites it’s only open to the public for 6 weekends every year during August – September.

I made it out there with the family last weekend. Even though it was pouring with rain we managed to have a good time.

To get there you take the old Pacific Highway and turn off a bit past Cowan, there’s a short drive on a fire trail and you’re there. Maybe the rain scared away the casual visitors, the place was a bush enthusiasts paradise, there was a photographic display of local plants and wildflowers, a small army of National Parks volunteers and a large supply of information sheets on what to see.

After talking to the volunteers we decided to do the 2km point loop trail, an easy flat walk along the ridge top. Chris, one of the volunteers offered to come on the walk with us.  Chris provided commentary  on what we were seeing and what to look out for, he was very knowledgeable and made the walk fun for the kids.  Thanks Chris!

I learnt a few new plants, and the proper pronunciations of a few old ones ( It’s hard when you only ready the names in a book )

We only saw a very small section of the reserve, it was clear there was so much more, we will be back again.